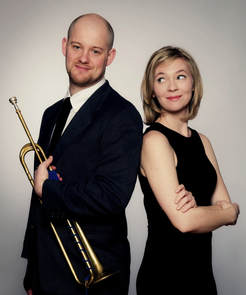 Created by New York City and Boston based soprano Corrine Byrne and trumpeter Andy Kozar, the Byrne:Kozar:Duo presents historically informed performances of Baroque music for natural trumpet and soprano in addition to commissioning new works for modern trumpet and soprano. They have been said to create 'an arresting symbiosis in their melding of voice and trumpet timbres' (Textura) and that the 'trumpet and voice seem to take on one another's qualities' (Bandcamp Daily).  As individuals, Corrine has been called a ‘celebrated singer’ (Broadway World) and 'a rising star' (Arts Westchester) while Andy has been called a 'star soloist' (TimeOutNY) and ‘polished and dynamic, with very impressive playing’ (Baltimore Sun).  Combining their strengths as performers and interpreters of both early and modern music, the Byrne:Kozar:Duo has commissioned new works by composers including Reiko Futing, Paula Matthusen, David Smooke, Scott Worthington and Scott Wollschleger.  As recording artists, they can be heard on a recent release of the music of Scott Wollshleger on New Focus Recordings which was named a Notable Recording of 2017 in The New Yorker.  Recent appearances include performances at the Boston Early Music Festival, Lake George Music Festival, Divergent Studio at the Longy School of Music, NienteForte in New Orleans, and New Music Miami. They have also been heard on American Public Media's Performance Today as well as on National Public Radio. 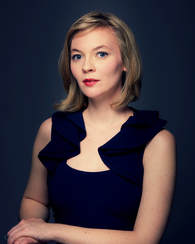 Hailed as a "distinguished" "rising star" who sings "to great acclaim," and gives "delightful performances," Boston and New York-based soprano Corrine Byrne has quickly become a sought-after interpreter of repertoire from the Medieval to the Baroque era, and music by today's most daring contemporary composers. Byrne's most recent roles include Filia (Jephte), Anna (Die Todsünden), Cathy (The Last Five Years), Gretel (Hansel and Gretel), Doctor in the workshop previews of The Scarlet Professor by Eric Sawyer,  and Anima in Hildegard von Bingen's Ordo Virtutum. Byrne recently performed Scene 1 of Niloufar Nourbakhsh's opera "We the Innumerable," and her performance was featured on the Indie Opera Podcast.  Byrne was one of 40 soloists in a rare performance of Luciano Berio's major work "Coro" under Berlin Philharmonic conductor Sir Simon Rattle with the Lucerne Festival Academy Orchestra in Lucerne, Switzerland, and she was a young artist with Boston Early Music Festival. Byrne has also appeared as a soloist with REBEL Baroque Ensemble, Symphony New Hampshire, One World Symphony, The Lake George Music Festival Orchestra, the Madison Bach Musicians, Mountainside Baroque, Manhattan School of Music Symphony Orchestra, Plymouth Philharmonic Orchestra, New York Session Symphony, Westchester Oratorio Society, the Harrisburg Choral Society, the Kansas City Baroque Consortium, the UMass Bach Festival and Symposium, Capitol City Opera Harrisburg, Amherst Symphony, Bach at Bucknell, the Randolph Chamber Orchestra, the Susquehanna Valley Chorale, and she performed as a member of the Carnegie Hall Chamber Chorus singing Tallis' famed work Spem in alium with the Tallis Scholars as part of Carnegie Hall's Before Bach series. Byrne also subs with Lorelei Ensemble, and sang with the group for their entire 2015-2016 season where they premiered a new arrangement of love fail by David Lang at the Isabella Stewart Gardner Museum and also gave a performance at the Trinity Wall Street Twelfth Night Series where Byrne was featured as a soloist in the New York Times acclaimed performance of Perotin's "Beata Viscera."

Byrne is a core and founding member of Ensemble Musica Humana, which has presented concerts across the U.S and Canada, has recorded two full albums, has appeared in the BEMF Fringe Festival and SoHip concert series, founded the Pioneer Valley Early Music Day, and has appeared on the BBC adaptation of “Poldark.”  Byrne is also a core member of Tempus Continuum Ensemble, a group that has received a Jerome New Music Fund award and has been presented by the Arts in the Village Series alongside the Manhattan String Quartet and the Boston Trio. Byrne works with trumpeter Andrew Kozar to broaden the repertoire for solo trumpet and solo voice with the Byrne:Kozar:Duo, recently featured on NPR and a nationally broadcast episode of American Public Media's Performance Today, and whose recording of 'Bring Something Incomprehensible Into This World' was featured on Scott Wollschleger's 'soft abberation' -one of Alex Ross' picks for 'Notable Recordings of 2017' in The New Yorker Magazine. The duo has been presented by the Boston Sculptor's Gallery, Oklahoma City University, Versipel New Music, Southern Louisiana University, New Music Miami, SUNY Fredonia and Ethos New Music, Tulane University and nienteForte, and the Lake George Music Festival. Byrne has collaborated with and performed world premieres of works by composers Scott Wollschleger, Paula Matthuson, Reiko Futing, Anne Goldberg, Alex Burtzos, Kevin Baldwin, Reiko Yamada, Carson Cooman, Eric Sawyer, Scott Worthington, David Smooke, Phillip Shuessler, Meaghan Burke, Finnur Karlsson, Jeff Gavett, Chris Cresswell, Christian Carey and Alex Weiser.  She also has worked one on one with composer/director of Santa Fe Chamber Music Festival Marc Neikrug on his Pueblo Songs which culminated in a performance featured in NewMusicBox.   Byrne sings polyphonic mass settings weekly with the Schola Cantorum at the Church of St. Vincent Ferrer in Manhattan under James Wetzel. In 2012, she performed at Gracie Mansion as a soloist with West Side 5 for Mayor Bloomberg and all of the New York City Council.

Byrne appeared on a career development panel alongside Kent Tritle and Damien Sneed at Manhattan School of Music, and has given masterclasses at Wagner College, Florida International University, Randolph College, Southeastern Louisiana State University, and Oklahoma City University. Byrne was a finalist for the 2012 Career Bridges Grant Awards, a National Online Round winner in the 2013 Classical Singer Magazine Competition, a finalist in the Handel Aria Competition as part of the 2015 Madison Early Music Festival, and a semi-finalist in the 2016 New York Oratorio Society Solo Competition.  She holds a B.M from UMass Amherst where she studied with Janna Baty and Amy Johnson, an M.M from Manhattan School of Music where she studied with Pat Misslin and Mark Oswald, and she received her D.M.A from Stony Brook University where she studied on scholarship with Randall Scarlata. She is currently on faculty and serves as the chair of Vocal Studies at Longy School of Music of Bard College, and was previously Assistant Professor of Voice at Susquehanna University and faculty at Wagner College.

Byrne is a member of Beyond Artists, a coalition of artists that donates a percentage of their concert fee to organizations they care about. Byrne supports the Dana Farber Cancer Institute and South Shore Habitat for Humanity through her performances. 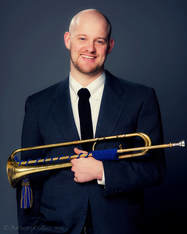 A native of Pittsburgh, Andy Kozar is a New York City based trumpeter, improviser, composer and educator that has been called a 'star soloist' by TimeOutNY, noted for his 'precise trumpeting' by New York Classical Review and has been said to be ‘agile as he navigated leaps and slurs with grace...he shifted between lyricism and aggression deftly’ by the International Trumpet Guild Journal.

A strong advocate of contemporary music, he is a founding member of the contemporary music quartet loadbang which has been called ‘inventive’ by the New York Times, ‘cultivated’ by The New Yorker, and ‘a formidable new-music force’ by TimeOutNY. With loadbang, his playing has been said to be ‘polished and dynamic, with very impressive playing’ by the Baltimore Sun, and that he 'coaxed the ethereal and the gritty from [his] muted instrument...and revealed a facility for shaping notes and color' by the San Francisco Classical Voice. He is also a member the Byrne:KozarDuo, and has performed with new music ensembles including Bang on a Can, Ensemble Signal, Boston Modern Orchestra Project, Argento Chamber Ensemble, Talea Ensemble, Ensemble Echappe, Tilt Brass, Wet Ink, Boston Music Viva, and Mark Gould’s Pink Baby Monster. He has performed alongside artists and conductors such as Dave Douglas, Pablo Heras Casado, James Thompson, Mark Gould and Brad Lubman, in addition to working closely with numerous composers including Helmut Lachenmann, Christian Wolff, Joe Hisaishi (Spirited Away), George Lewis, Chaya Czernowin, and Pulitzer Prize winning composers David Lang and Charles Wuorinen. Kozar has performed at venues both domestically and abroad including Carnegie Hall, Lincoln Center, The Kennedy Center, MoMA, Rothko Chapel, The Barclays Center, and Shanghai Symphony Hall.

A flexible performer well versed in many styles, he has performed with the St. Petersburg Ballet, Wordless Music Orchestra, the Stamford and Hudson Valley Philharmonics, and was the principal trumpet of the Norwalk Symphony Orchestra from 2014-2018. As a baroque trumpeter, he has performed as a part of the Boston Early Music Festival and with period performance ensembles including Rebel Baroque Orchestra, American Baroque Orchestra, The Bach Players of Holy Trinity in New York City, Ensemble Musica Humana, and at St. Thomas alongside the St. Thomas Boys Choir. In addition to contemporary and traditional classical music, his versatility has also allowed him the opportunity to perform with the Grammy nominated Travis Sullivan’s Bjorkestra, Russian pop-stars Tamara Gverdtsiteli and Igor Krutoi, indie pop bands including YUCK, the Generationals, and Emanuel and the Fear, with Bang on a Can's Asphalt Orchestra, and on Broadway’s Mary Poppins.

In addition to performing, his work as a composer has been said to have 'intriguing sonorities' by the New York Times, to be ‘virtuosic’ by The New Yorker, ‘...extremely effective and quite touching’ by New Music Box, and ‘at the cutting edge of creativity’ by Sequenza21. It has been performed by loadbang, the MIVOS Quartet, Bang on a Can All Star’s pianist Vicky Chow, and many others.

Andy has studied with Anthony Pasquarelli, James Thompson, Brian McWhorter, Jens Lindemann and Mark Gould, has studied at Carnegie Mellon University, holds a BM from the Eastman School of Music, and a MM in contemporary performance at Manhattan School of Music. He has given lectures and master-classes at institutions including The Juilliard School, Eastman School of Music, Peabody Conservatory, New York University, and Northwestern University. Kozar  regularly works as a teaching artist for the New York Philharmonic’s Very Young Composers program and is on faculty at Hunter College as well as the Longy School of Music of Bard College in Boston where, in addition to teaching trumpet, he is the Chair of the Winds and Brass Department, co-directs Ensemble Uncaged, Longy's contemporary music ensemble, and is the co-director of the Divergent Studio, a summer program designed for young composers and performers of contemporary music.  Andy is a Yamaha Performing Artist and exclusively performs on Yamaha trumpets.